Drilling Fluids Purification System is also called Solids control system, primarily applied for solids control and solid-fluid separation in drilling fluids so that the drilling mud might be recycled. Consisted of 3-7 module composite tanks and configured with 4 phases of purification equipment, it is fit for 2000-7000 meter oil drilling processes. 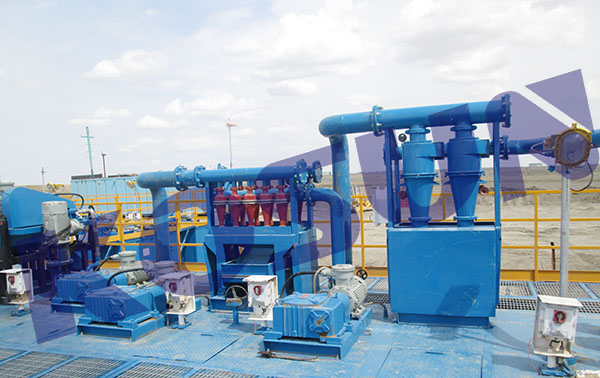 The whole system is innovative with the bottoms of its purification tanks made to be conical and its edges equipped with mud agitating system to prevent solids from depositing. Besides, its tanks and bins may be comparted or united depending on the demands of drilling processes. Each of them is connected to another via pipe network in which the valves at the bottom of suction pipes are flexible while being opened, but can turn to be a good seal when closed.

Features of Drilling Fluids Purification System:
-Its compact design makes it take up small space which is much less that those installed in the traditional ways.
-Its mud tank is able to carry solids control equipment, hold drilling mud and effectively reduce waste on the mud so that its recycling is fulfilled to the greatest extent.
-Its mud tanks are all fixed with built-in pipelines on which there are valves so as to pump drilling mud with various solids content during the operation. Besides, some medium slurry pipelines and clean water pipelines are also equipped.
-It contains jet mud mixer which would be used to concoct drilling mud with different specific weights.
-All its equipment is processed to be able to resist corrosion and abrasion, so they all have longer lifespan.
-Solids control system can be flexibly assembled according to customers' requirements.
-It is able work under any terrible drilling conditions, being cold-resistant, thermostable, explosion-proof, leakage-proof, corrosion-proof and rain-proof.
-It is convenient to assemble and move with the drilling crew oftentimes.